North Hudson Regional Fire and Rescue officially welcomed ten new probationary firefighters and promoted six experienced fire officers at a ceremony recently held at Schuetzen Park Banquet Hall in North Bergen. The new recruits will be attending the Morris County Fire Academy and are expected to begin their service to NHRFR by early July. They will join 75 others hired over the past few years including 65 military veterans, helping to enhance public safety in the NHRFR coverage municipalities of North Bergen, Union City, West New York, Weehawken and Guttenberg and surrounding areas.

“The leaders of our five communities are absolutely committed to providing the best equipment and the necessary manpower to operate the Regional,” said Weehawken Mayor Richard Turner, who chairs the Regional’s Management Committee. “NHRFR is the third largest fire department in New Jersey and we are proud to welcome these new recruits to add to the 75 firefighters we have hired over the past few years.” 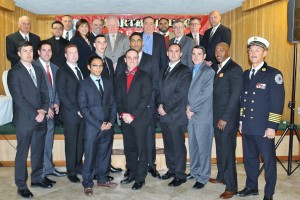 “Having both the necessary manpower and supervisory positions filled will help make North Hudson Regional Fire and Rescue even more effective at keeping our residents safe,” said NHRFR Chief Frank Montagne. “This is a wonderful day for the Regional and especially for the new recruits and promoted officers and their families and friends.”

“Our North Hudson Regional Fire and Rescue does an incredible job keeping our communities safe and doing it in an efficient way that also protects our taxpayers,” said North Bergen Mayor Nick Sacco. “It’s great to see these brave young men advancing in their careers and starting their service here and I wish them all the best.”

“Keeping our people safe is the most important job of local government and I am very proud of these new and promoted firefighters,” said Mayor Roque. “We are continuing to invest in public safety and will always work to ensure that our residents are protected from fires and other disasters.”